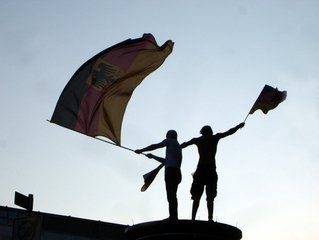 The World Cup is just a few days away and every football fan will be spending the next month in a state of blissful spectation. That is until England get knocked out on penalties, of course. Whether you want to see Roy Hodgson’s men lift the trophy in July or not, there’s every excuse to plan World Cup themed events. Barbecues are a favourite, while with games on in the evening you can arrange indoor parties too.

Of course football and gambling are not strangers to one another, so why not arrange a night in with a few fun casino games to add a bit of spice to the event?

Why not replace the numbers with the names of the 32 starting nations? It leaves 5 unassigned numbers (including the zero) but you can simply roll again if one of these comes up. Or the top 5 ranked teams could be given two numbers. If the any of the playing teams come up there could be a bonus or a forfeit if you’re playing a straight round of roulette. Bet on groups or, when further on through the tournament, on knockout round match-ups.

Alternatively, use the table but not the wheel for entertainment. You can put your chips on the minutes when a goal is scored, the number on the player’s shirt who scores or even the combined number of goals in an evening. With three games per day during the first round stages, you could see a fair number of combinations.

Play stud or Texas Hold ‘Em during the 90 minutes, blinds going up every 15 minutes. Bonuses or forfeits can be dished out. For example, assign the 22 starting players a card each and if the winning hand is made up of one team the other players could have to pay a fine to the pot. You could make the 13 clubs and 13 hearts the starting 11 plus two likely subs. However you decide to play the rules it could either encourage people to go for flushes or sending them running away from them if there is a forfeit to endure. Or you can use only face cards for your players. With three games a night you could easily have three rounds of cards and lots of different versions of poker.

The classic sweepstake is always fun. Write the names of the teams in a hat and each person pulls out one or more countries. You could have 6 teams in the hat, or have variations such as total goals scored on the night. This could go on in the background as you get on with your other casino games.

How to Organise a Las Vegas Themed Casino Night Party

Our Tables
Areas we cover
Site by WebsitesCo | Fun Casinos © 2020
This website uses cookies to improve your experience. We'll assume you're ok with this, but you can opt-out if you wish.Accept Read More
Privacy & Cookies Policy
Necessary Always Enabled
Back To Top