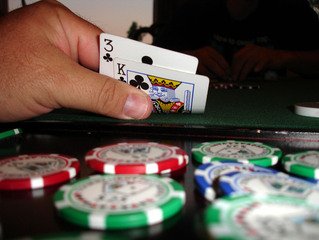 Poker has lots of different forms – the versions are nearly as numerous as there are cards in a deck, probably more so.

Famous and popular versions include Texas Hold ‘Em and Five Card Draw are the best known and most widely played. But there are a tonne of unusual poker variations that are well worth a try the next time you hire a poker table.

So-called because you need plenty of them to do well in this game, which is just as much about bluff as skill. Each player pays an ante and gets three cards dealt face down. They then have to decide whether to play based on their hand’s strength or their desire to bluff.

The dealer counts ‘one, two, three, guts’ as the players push their cards towards of the middle of the table. As the dealer says ‘guts’ the players either drop their cards to fold or hold them up to continue playing. The highest hand wins (straights beat flushes in this three-card game for obvious reasons). Losers pay a penalty of the entire pot, adding extra spice to each round and a player’s willingness to bluff. Those with a reckless streak in them could be well advised to avoid this poker game!

Despite its fruity name, this game is actually not that dissimilar to Texas Hold ‘Em, except players are dealt three pocket cards at the start of the hand. One round of betting is done ‘in the dark’, which is followed by a flop of three cards. The players will then discard one of their three pocket cards and bet. This is followed by a round of betting after both the turn and the river as in Texas Hold ‘Em.

This is a lowball version of poker where players win by having the lowest hand. Unlike other lowball games Aces are high. Straights, flushes, and all combinations better than one pair count – the ‘best’ possible hand, known as a wheel, is 7, 5, 4, 3, 2 not all of one suit.

Players get dealt five cards and a round of betting takes place. Each player can then draw for a better hand, up to three times in total, with a round of betting after each draw. Players must match the last bet before they can draw again. After all bets are in the showdown sees the player with the lowest hand win.

A Roulette table makes for a great game at any event, from a charity bash…

Fun casinos bring the best casino games to wherever you are. These mobile casinos offer…

This website uses cookies to improve your experience while you navigate through the website. Out of these, the cookies that are categorized as necessary are stored on your browser as they are essential for the working of basic functionalities of the website. We also use third-party cookies that help us analyze and understand how you use this website. These cookies will be stored in your browser only with your consent. You also have the option to opt-out of these cookies. But opting out of some of these cookies may affect your browsing experience.
Necessary Always Enabled
Necessary cookies are absolutely essential for the website to function properly. This category only includes cookies that ensures basic functionalities and security features of the website. These cookies do not store any personal information.
Non-necessary
Any cookies that may not be particularly necessary for the website to function and is used specifically to collect user personal data via analytics, ads, other embedded contents are termed as non-necessary cookies. It is mandatory to procure user consent prior to running these cookies on your website.
SAVE & ACCEPT
Back To Top